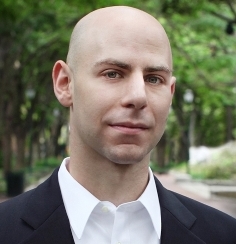 We are thrilled to announce our first highly regarded speaker at the M&T 35th Anniversary Celebration this November: Wharton professor Adam Grant. Adam’s success as the youngest full professor at Wharton and author of the bestseller Give and Take is both impressive and inspiring. Please join us on Saturday, November 8th to hear all about Adam’s experiences!

Adam Grant is Wharton’s youngest full professor and highest-rated teacher. He has been recognized as one of BusinessWeek’s favorite professors, one of the world’s 40 best business professors under 40, and one of Malcolm Gladwell’s favorite social science writers. His speaking and consulting clients include Google, the NFL, Merck, Pixar, Goldman Sachs, the United Nations, the World Economic Forum, and the U.S. Army and Navy. Adam is the author of Give and Take, a New York Times bestseller that has been translated into two dozen languages and named one of the best books of 2013 by Amazon, Apple, the Financial Times, and the Wall Street Journal-as well as one of Oprah’s riveting reads, Fortune’s must-read business books, Harvard Business Review’s ideas that shaped management, and the Washington Post’s books every leader should read. His research has been featured on the Today Show and in the New York Times magazine cover story, “Is giving the secret to getting ahead?” He received his B.A. from Harvard University and his Ph.D. in organizational psychology from the University of Michigan, and he is a former record-setting advertising director, junior Olympic springboard diver, and professional magician.

The 35th is a perfect time to consider supporting M&T into the future!

“The M&T Program has made a huge difference in my life – I’m delighted to give back to allow future students to have the same opportunities I have had as a result. I hope you’ll join me in donating to the M&T 35th fundraising efforts!” - Ken Glass (M&T '82)

The Jerome Fisher Program in Management and Technology is the University of Pennsylvania’s distinguished undergraduate dual-degree program in business and engineering. Students in the M&T program fulfill all the requirements for degrees from both the School of Engineering and Applied Sciences (SEAS) and the Wharton School. The M&T Program will celebrate its 35th anniversary to highlight the achievements of its alumni and student community over the past 35 years.
Loading Comments...
%d bloggers like this: